The North Platte Genealogical Society of North Platte, Nebraska will be presenting a Family Discovery Genealogy Workshop on Saturday, April 21st.  This is an opportunity to learn how to discover your family and your ancestors.  If you have been doing genealogical research for any amount of time, the workshop will be very helpful.

It will be held from 1 pm to 6 pm in the Fireside Room of Church of Our Savior (Episcopal), 203 West 4th, North Platte.  Parking is on the west side of the church.  If you are a member of the North Platte Genealogical Society, it is free; otherwise $10 per person.  There will be a syllabus, drawings and handouts, as well as displays to view.  You can register at the door. 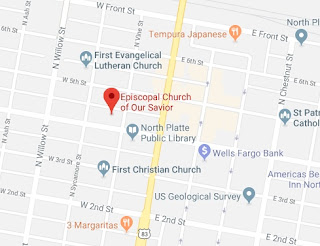 The presentations are ...
Starting & Continuing Your Tree
There's More Than Ancestry
Finding Family Elsewhere
DNA Is Testing for YOU?

This will be a great learning experience with lots of good information and sharing of genealogical experiences.

More information rvcole@charter.net.
Posted by Ruby Coleman at 11:33 AM No comments: 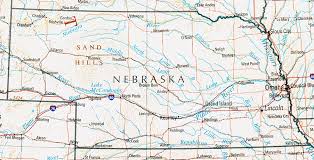 NET has a new program starting this Friday, August 21st.  It's a special that is a cross between Nebraska Stories and Nebraska Land and Sky.  It's called Discovering Nebraska and is all about unique stories from Nebraska.  The program is 90 minutes long with a series of segments seven to ten minutes in length.  Check your NET schedule as it will premiere at 8:30 CT on Friday.

The segments include a visit to Happy Jack Peak and Chalk Mine at Scotia.  Another segment features the Wessels Living History Farm near York.  The Winnebago Tribe and their heritage will be featured in another segment.  You will get to see the Ho-Chunk Village in Winnebago.

Viewers will also see the 3,000 seat venue Five Rocks Amphitheater in Gering.  It provides a variety of musical groups and open-air entertainment in the spring and summer months.  Do you remember going to a drive-in theater?  Take a trip with NET to the tK-Starlite Drive-In and Theater at Neligh.  It is one of only two remaining in the state of Nebraska.

Stop by the Pony Express Station in Gothenburg to discover what it was like along the Oregon Trail.  Then travel on to Robidoux Pass and Robidoux Trading Post near Gering.

Thanks to NET for bringing such great programing to Nebraskans.  And for showing us our great state.

Posted by Ruby Coleman at 9:54 AM No comments:

My sister-in-law, Cheri Hopkins, posted this on our blog, You Go Genealogy Girls.  She has given me permission to post it here.

Gail Blankenau of Nebraska is the featured speaker.  She is an experienced genealogist and photo historian who shares her research and advice in many well-known periodicals.  We are proud to have her as a Nebraska genealogist!

Topics at the Genealogy Seminar are ...
Stories in Stone - Cemetery Research
Using German Parish Records
Who is hiding in your drawer? - dating and identifying photographs

She will also be speaking at a free seminar on Friday, 17 April 2015 from 4 p.m. to 6 p.m. at the Siouxland Libraries Main Branch, 200 N. Dakota Ave., Sioux Falls, South Dakota.  The topic for this will be Beginning Genealogy - Hunting and Gathering.

While you are checking out the seminar, be sure to browse through the web site.  If you have ancestry in that part of South Dakota, there is a good deal of information available.

Posted by Ruby Coleman at 11:29 AM No comments:

Want to learn more about genealogical researching in Nebraska?  I have two recorded (bonus) webinars at Legacy Family Tree Webinars.  They are

You must be a subscriber (member) of Legacy Family Tree Webinars.  If you elect to subscribe, membership will allow more than 213 and growing webinars, but also a discount from the online products that include quick guides, books, CDs, software and more.  The nice thing about having a membership in Legacy Family Tree Webinars is that you can watch the webinars at any time of the day or night.

In the first webinar, learn about the early history, settlements and geography of Nebraska, all of which are influential in your research.  The diversified state has 93 counties with varying records.  In the second webinar, I go into more detail about the types of records you will encounter, the collections and records in the Nebraska State Historical Society, Nebraska State Surveyor's Office and Civil War Veterans Museum. 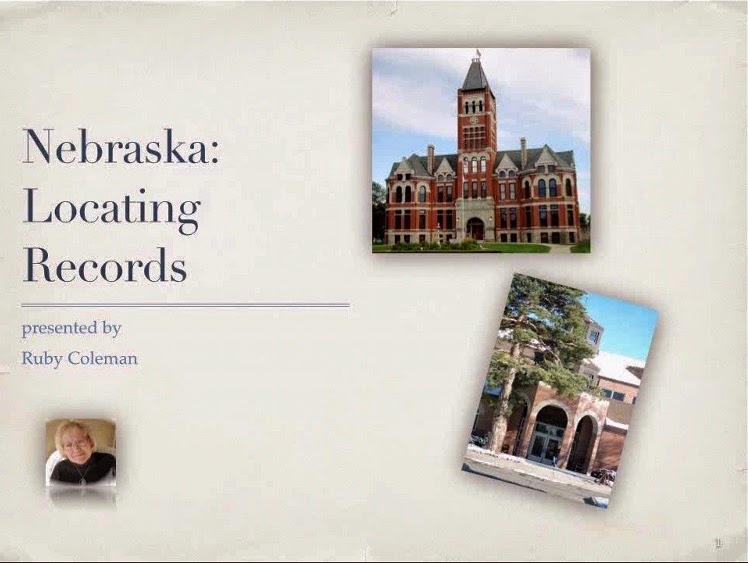 When you login and click to view one of my webinars, there will also be a link for the syllabus, plus to purchase my book, Genealogical Research in Nebraska, revised edition in digital format.

While browsing through the list of 213 classes/webinars, be sure to click on my friend Gail Blankenau's webinar Women Homesteaders and Genealogy.  We both love doing research in Nebraska.

Enjoy!
Posted by Ruby Coleman at 1:55 PM No comments:

Homecoming: The Impact on Nebraska Veterans

What is the impact of a homecoming on a soldier?  It can produce lasting effects.  NET 1 in Nebraska will be presenting Homecoming: The Impact on Nebraska Veterans on November 10th, 14th and 17th.  It will air at 9 pm CT on the 10th and 14th and at 11 p.m. CT on the 17th.

NET News talks with veterans from different wars, military experts and a psychologist to examine the issue.  They also look at a second homecoming some sixty years in the making for Nebraska Korean War veterans.  The Heartland Honor Flight project gives those veterans an opportunity to visit the Korean War Veterans Memorial in Washington, DC.

Did you know that those "honor flights" were conceived by Nebraskans?  Bill and Evonne Williams worked on the idea around their kitchen table and over the past seven years, a series of trips has made veterans' dreams come true.

More information can be found at the NET web site.  Mark your calendars because you will not want to miss this presentation.
Posted by Ruby Coleman at 4:13 PM No comments:

This will be a real treat for the eyes! NEBRASKA Land & Sky is a 60 minute program that will air on Monday, August 11, 2014 at 7 pm on NET 1.  Living in this state for many years, I can't wait to see the sweeping views that the program promises to bring to the viewers.

From high above the land and down on-the-ground, the documentary traces Nebraska’s history and legacy. Featured stops include Willa Cather’s childhood home in Red Cloud, Nebraska’s majestic and rugged landscapes around Wildcat Hills in the Panhandle and the vibrant cityscapes of eastern Nebraska.  Homage is given to Nebraska’s ranchers and farmers, the state’s culture, recreation and exciting moments in Nebraska sports history. A British aerial photographic team, Skyworks, joined the NET crew on their statewide journey to film and archive Nebraska’s vast landscapes and hidden places from above. Skyworks specializes in top-end aerial filming, creating footage and shows for broadcasters all over the world, including National Geographic, PBS and the BBC. “NEBRASKA Land & Sky,” funded in part by the Nebraska Tourism Commission and Nebraska Game and Parks Commission, is a production of NET Television.

Watch the Preview Link.   Then mark your calendar for the viewing times on NET 1.  They are

Posted by Ruby Coleman at 12:19 PM No comments: 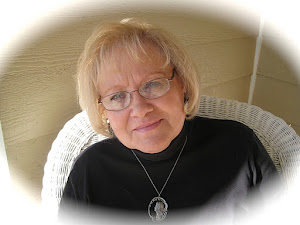 Ruby Coleman
North Platte, Nebraska, United States
I am a professional genealogist, writer, lecturer and teacher living in Nebraska. Genealogy is truly my passion and has been for over 40 years. I am a widow and have two children,two grandchildren, one great grandchild and a sister-in-law who is also doing genealogical research. We lecture and travel together and are known as the You Go Genealogy Girls. At this time I accept clients for genealogical research only in Lincoln Co., Nebraska. I also do genealogical consulting. My research in Lincoln Co. is in courthouse records, the library, newspaper records and cemetery research. Please inquire about my lecture topics and fees. I have lectured at national, state and local conferences. rvcole@charter.net http://www.genealogyworks.weebly.com 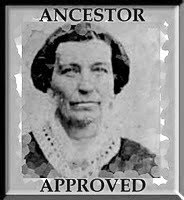 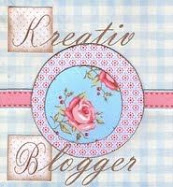 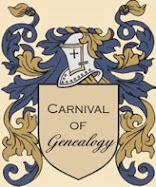